Caring for wildlife casualties yourself Print

If you find a sick, injured or apparently orphaned wild animal, you may well be tempted to care for it yourself. You’ll likely have formed an emotional attachment to it, especially if it’s a baby or displays no fear or aggression. If you’re honest, you’re probably getting a warm glow from the thought of ‘saving’ it, of being a hero. That’s ok, we all get that, it’s fine and normal. But – and I’m sorry to be blunt – this isn’t about you. This is about this animal’s one and only chance at life. Any wild animal which allows itself to be captured by a human is in serious trouble and it’s highly unlikely that the average member of the public will be able to ensure all its needs are met, certainly not to the same extent as that of an experienced wildlife rescuer.

An injured or unwell creature is going to need medical attention which you will be unable to provide. Imagine you saw a dog get hit by a car and injured. You wouldn’t take it home and look after it yourself would you? In many cases, a wildlife casualty will be in an even worse position as the injury is likely to be old or infected. It’s severe enough that it was unable to escape its most feared predator (you) so it’s clearly very unwell. Even apparently minor issues like a bird caught by a cat need medical attention (catted birds are likely to die without antibiotics) and most will need pain relief as a minimum. Wild animals survive by hiding the extent of their injuries and suffering so might look ok to the untrained eye but actually be in a great deal of pain or extremely ill. Failing to provide an animal with proper care, suitable housing and medical attention is a criminal offence under the Animal Welfare Act.

A rescuer received a hedgehog which the finder had had for four days. The finder was a member of the British Hedgehog Preservation Society so was confident that they knew how to care for it. They eventually decided to seek help on noticing that the hedgehog had a gungy eye. The rescuer examined it and found the hedgehog was thin, dehydrated, had a heavy parasite burden and, worst of all, a badly broken jaw. The pain the poor creature must have been in for those extra unnecessary days is awful to imagine.

We were contacted by a member of the public who found a hedgehog that was out during the day and looked thin. They took it to their trusted vet who pronounced the hedgehog healthy, just in need of feeding up. The member of the public opted to care for the hedgehog while it recovered despite our warnings that there was likely to be a deeper reason for its condition and our advice to get it checked by a rescuer. The hedgehog was dead within 12 hours.

An orphaned, abandoned or injured baby will need regular feeding, in some cases as often as every 15 minutes and sometimes through the night. Specialist feeds are needed as is considerable skill to get quantities right and deliver the feed correctly – getting this wrong can lead to choking or inhalation pneumonia. At some stages of development, babies need supplemental heat – without it they could die of hypothermia, but provide it for too long and they could overheat. Some babies need help to toilet and without that toxins build up in their system and poison them from within. For most babies, it is absolutely critical that they are raised with others of their species in order to avoid imprinting and to ensure they are socialised and know how to interact with others. This is a vital skill in the wild and, in some species, a baby raised on its own may never be suitable for release. You might think this is fine and you can just keep it as a pet. Very very few wild species adapt well to life in captivity. Keep in mind the animals we commonly keep as pets have been domesticated for thousands of years so have had most of their wild instinct removed through selective breeding. A baby born to wild parents will have all its wild instincts and will most likely come to fear and hate you once it reaches puberty. Without the company of its own species, it will be lonely, bored, and confused. It certainly won’t respect your furniture or be trained to toilet in the garden or a litter tray. Again, please put what is best for the casualty above your own feelings here. This is a creature born to be wild. 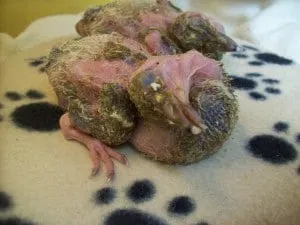 A member of the public attempted to hand rear these two baby pigeons, eventually taking them to Five Valleys Bird and Hedgehog Rescue when they didn’t thrive.

Unfortunately, they had fed the wrong food and the babies couldn’t digest it. As the finders weren’t experienced in feeding baby pigeons, they also covered them in food which stuck painfully to their skin when it dried. Both babies died soon after admission. 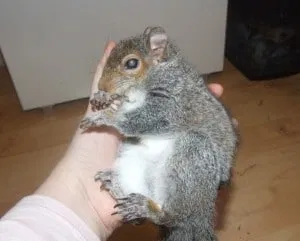 This squirrel was caught by a cat as a baby. The cat’s owners decided to try and care for her themselves, feeding her with cow’s milk. A combination of infection from the cat bite and dehydration from the diarrhoea caused by the inappropriate diet led to her suffering from seizures. When she was eventually surrendered she was emaciated, hypothermic and covered in her own diarrhoea. It was a miracle she survived but she was left with brain damage which caused partial blindness and recurrent seizures meaning she couldn’t be released.

For any casualty you need also to consider the long term care plan. Even if you can get the animal through their initial problem, do you have facilities to rehabilitate them? You’ll need a soft release enclosure placed in an area which is suitable for its species and you’ll need to release it in the right place at the right time of year so that it doesn’t get attacked by others in the case of territorial species. Do you have those facilities? Do you have that knowledge and understanding of wildlife behaviour? If not, please please pass the casualty to someone who does. It is not enough just to take the animal to into your garden or local park and open the cage door – indeed doing so is likely to be a criminal offence.

But if I don’t care for it who will?

There are hundreds of specialist wildlife rescue organisations in the UK who have the knowledge, training, experience and facilities to care for your casualty properly. You can put your postcode into our map to see those nearby.

But what if they just put it down?

Sadly in some cases euthanasia is necessary because an animal is just too badly injured and in these cases it is far kinder to surrender your casualty to someone who has the knowledge to make this assessment than to leave the poor creature to suffer. This won’t be a decision which is made lightly. Most wildlife rescues are small charities run by families who put their heart and soul into each and every individual patient. If you’re worried – just ask them what their particular policies are. Most will be happy to update you on your casualty’s progress and, if appropriate, perhaps even return it to you for release when better. Or you can contact our helpdesk and we’ll give you honest, unbiased advice about the animal’s future and which rescue might be best placed to help them. Either way, your casualty’s chances of survival and a meaningful life back in the wild are far, far better if surrendered to those with the experience and facilities it needs. 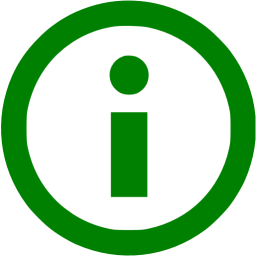 You can find rescues in your area by putting your location into the search facility at directory.helpwildlife.co.uk. If you are unsure whether to intervene or you have difficulty finding a rescue who can help, you can contact us via helpwildlife.co.uk/helpdesk and our volunteers will give you advice and support.

Still need convincing? Here are some posts from our wildlife rescue colleagues on this topic