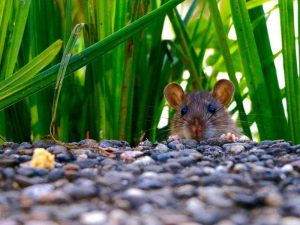 We have one species of rat in the UK – the brown rat or Rattus Norvegicus. It’s worth being aware that this is not the same species associated (incorrectly) with ‘the plague’. There are three species of mice you’re most likely to see in your garden – the wood mouse, house mouse and yellow-necked field mouse.

Rats and mice need do little more than just be seen to have people in a panic. The usual concern is the spread of disease when, in fact, they are no more likely to pass a disease to a human than any other animal. Indeed you are far more likely to contract something from a pet animal than any wildlife. In fact, rodents play an important ecological role, providing a food supply for foxes, badgers, birds of prey and even hedgehogs! A well-balanced eco-system will ensure that there are enough rodents to provide food but not so many that they become an infestation. Of course, in our world, where we interfere relentlessly, this balance won't always be easy to achieve. Keeping your patch of the world tidy and not leaving lots of spilt/available food around will help.

Most gardens will have a small population of rats and mice visiting without causing any problems. But if their numbers increase or they start to tunnel under patios, decking or sheds, their presence might cause concern.

Rats can pose a threat to small, outdoor pets and will sometimes prey on them. If you keep pets outside, ensure their enclosures are made with strong mesh, not chicken wire, and any runs are sat on paving to prevent burrowing in. Enclosures are best made with metal rather than wood which can be chewed through. Don’t forget to store pet feed in metal storage units too otherwise it will be a major attractant.

Less often, rats and mice might find their way into our homes where they can do damage by nibbling on electrics.

Well there’s the obvious issues such as it’s cruel, unnecessary and unfair to take an animal’s life simply because it is causing you inconvenience. Aside from that it is difficult and dangerous. Rodents can smell baited food so will often avoid it and many have even evolved an immunity to common rodenticides. Poisoned food or the body of a poisoned animal could be taken by other animals who then suffer the effects of the poison. Or the animal could die in your home, attracting flies and leading to a serious health hazard. Attempting to shoot them using an air rifle or similar is dangerous and difficult for obvious reasons and your chances of hitting one accurately enough to provide a humane death are minute. But above all it will not solve your problem!

If you kill the rat who is tunnelling under your shed, or the mouse who is sneaking into your kitchen, or stealing your bird food but still leave your garden wild, your bird food easily accessible and gaps in your kitchen walls, others will soon move in to the now-vacant territory and repeat the same behaviours. 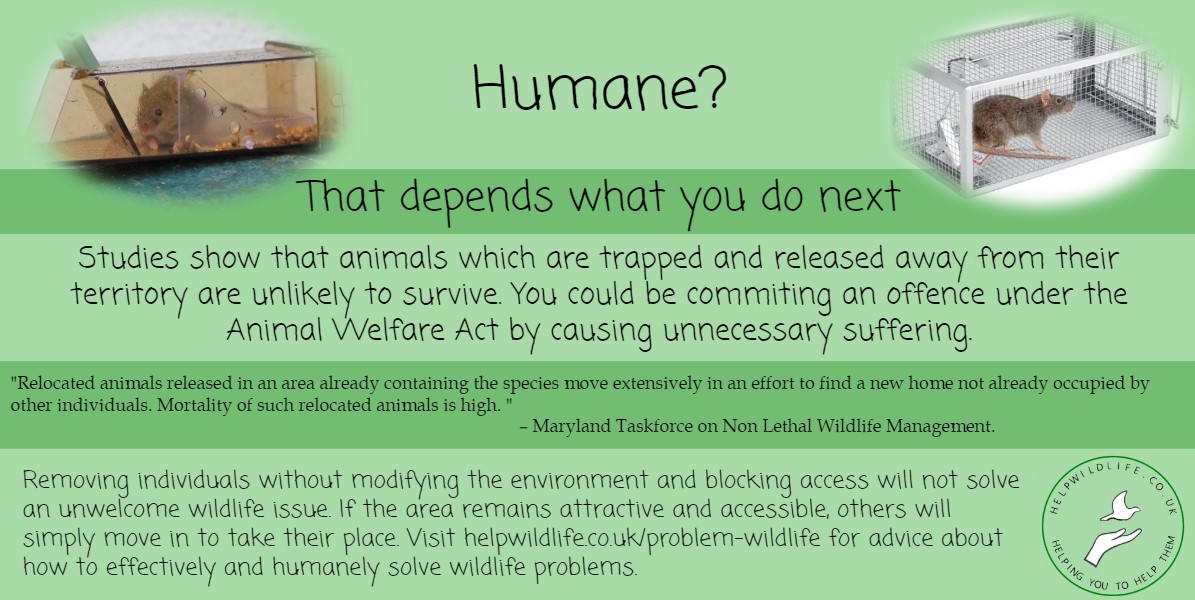 Some well-intentioned people are taking a more compassionate approach by purchasing humane traps and releasing caught individuals. Whilst we admire their attempts to deal with the problem without killing, this method is as ineffective as killing them. The removed individuals will still be replaced by breeding if changes aren’t made to the environment. It is also not really humane as rats and mice are territorial. Resident animals may chase away any new arrivals, causing them to flee to an unsafe area, putting them at greater risk of predation and making it harder for them to find food and a safe nesting area. You should be aware that you become legally responsible for the welfare of any animal in a trap and if your actions lead to it suffering, you could be in breach of the Animal Welfare Act.

There is a widespread public belief that live capture and relocation is a humane solution to wildlife conflicts in and around the home and garden. Research to date shows that the technique is not particularly humane. Relocated animals released in an area already containing the species move extensively in an effort to find a new home not already occupied by other individuals. Mortality of such relocated animals is high. In addition, removal of animals may create a vacuum at the problem site which is quickly filled by new animals.

Removal of the nesting, shelter and roosting places can significantly reduce many types of vertebrate pest problems.

The most effective method of resolving a wildlife conflict is to remove what is attracting the animal – usually this is food, shelter, and nesting sites. These basic tips will help to make your garden less interesting

If that proves ineffective, the next step is to actively deter the animals. To do this, you need to offend as many of their senses as possible.

The third step is to block access. You’re unlikely to be able to stop rats and mice getting into your garden, but stopping them getting into your house is more straightforward. Just bear in mind that they can squeeze through extremely small holes – rats through half an inch, mice as little as half a centimetre. The most common points of entry are where pipes enter your house or through broken air bricks. Pipe holes can be covered with metal plates or filled with wire wool or expanding foam. Air bricks can be covered with metal mesh such as the purpose made ‘Mouse Mesh’. If rodents are tunneling in your garden, the most effective way to stop them is to put a paving slab down in the area. Alternatively, shingle is harder for them to burrow into.