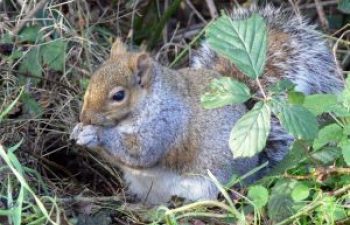 We’re going to focus on grey squirrels here as not many people complain about the presence of reds these days. Grey squirrels are perhaps our most controversial mammal species with people mostly either loving them with passion or hating them with great vitriol. Most of the hatred tends to come from the belief that they are solely responsible for the decline in numbers of the smaller, native Red Squirrel.

In fact, Red Squirrels are delicate little things who require very specific habitats to thrive. This habitat being large areas of pine forest and little disturbance from man. But there is very little of this sort of environment left in the UK now. Whether there were Grey Squirrels in this country or not, Reds simply would not survive in urban parks and the sort of areas that the greys are doing so well in. Red squirrels were also dying from pox viruses long before greys arrived on our shores. It’s not all that long ago that we hunted Red Squirrels almost to extinction so man has played a huge part in the decline of the reds both directly in culling them and indirectly in destroying their habitat. There’s more info about this debate at http://www.grey-squirrel.org.uk

So what issues can Grey Squirrels cause? 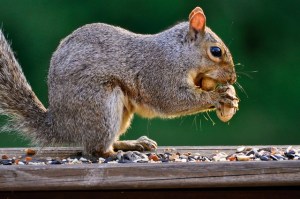 It can be frustrating when you are trying to support needy birds such as sparrows, and squirrels come along and steal the food before they can get to it. First of all the easiest method of feeding birds for the squirrels to intercept is the normal bird table. This isn’t a recommended method anyway largely because it is unhygienic and can cause problems during the baby season. A bird table’s easy accessibility can also attract rats and mice. The best thing you can do for your feathered visitors is offer specially formulated bird foods hung in a good sturdy squirrel proof feeder. Not only do these protect the food from squirrels and larger birds, but it means the birds can only access small pieces at a time through the mesh which are far more suitable for them to then feed their young with. It is worth investing in a high quality squirrel proof feeder if you are serious about helping birds in your garden. There are also several commercially available products such as “Squirrel Away” which are made from pepper which can be added to the bird food. Squirrels hate the taste but the birds don’t mind it at all.

When it comes to baby squirrel time, houses just look like big trees really. Squirrel instinct says climb it and find somewhere snug inside it. So that’s what they do. You might not even know they’re there until one day you hear a gnawing noise and you go to investigate and find little tooth marks in your beams and joists and, even more worryingly, in your wiring. This is a genuine concern and, much as we love squirrels, they’re not ideal lodgers. Thankfully this is a relatively simple thing to solve.

First of all you need to make the loft less attractive to the squirrel. She wants somewhere quiet, dark and safe to raise her babies so make it bright, dark and (seemingly) dangerous. Leave the lights on, put a de-tuned radio up there to make an annoying noise, go up there often and stomp about loudly, and leave something smelling of predators up there e.g. your clothing, a used cat litter tray, or a commercially available chemical deterrent.

Once your loft is no longer a safe, dark, peaceful place you should find Mrs Squirrel takes her babies elsewhere. At this point, it is advisable to have your eaves boarded using UPvC – not with wood as they can simply chew back through. Try to avoid sealing the eaves between March and September when squirrels are breeding. Once the eaves have been boarded you need to do a careful check for any remaining squirrels, particularly babies. Check any piles of material near the edges and in corners for little occupants to make sure no-one gets left behind. If there are older squirrels left in the loft contact your local wildlife rescue for help with trapping them.

Traditional methods of controlling mammalian pests such as poisoning or trapping are often ineffective, environmentally hazardous, socially unacceptable or uneconomic.

– Ministry of Agriculture, Fisheries and Food, Investigation of the use of semiochemicals for vertebrate pest population control, 2001.

Well there’s the obvious issues such as it’s cruel, unnecessary and unfair to take an animal’s life simply because it is causing you inconvenience. Aside from that it is difficult and dangerous. Squirrels can smell baited food so will often avoid it. Poisoned food or the body of a poisoned squirrel could be taken by other animals who then suffer the effects of the poison. Or the squirrel could die in your loft, attracting flies and leading to a serious health hazard. Attempting to shoot them using an air rifle or similar is dangerous and difficult for obvious reasons and your chances of hitting one accurately enough to provide a humane death are minute. But above all it will not solve your problem!

If you kill the squirrel who is digging up your bulbs, stealing your bird food or living in your loft but still leave your beds unprotected, your bird food easily accessible and your eaves open, another squirrel will soon move in to the now-vacant territory and repeat the same behaviours.

We are sometimes asked if a squirrel can be trapped and moved elsewhere instead. This would be ineffective for the exact same reasons as lethal control. It would also be illegal due to the distress and suffering it would cause the squirrel.

The most effective method of resolving a wildlife conflict is to remove what is attracting the animal – usually this is food, shelter, and nesting sites. These basic tips will help to make your garden less interesting

If that proves ineffective, the next step is to actively deter the animals. To do this, you need to offend as many of their senses as possible.

The third step is to block access. You don’t be able to block squirrels from entering your garden but, once they’ve moved out of your loft, you can block the eaves with Upvc to prevent them from returning.

As for the wider picture, grey squirrels are extremely well established in the UK and a cull can never succeed in eradicating them, it is simply impossible. While the habitat and food are available any culled animals will quickly be replaced by the remaining animals breeding. Any attempted cull can only lead to immense suffering and will do little to help the Red Squirrel whose main enemy is loss of habitat.