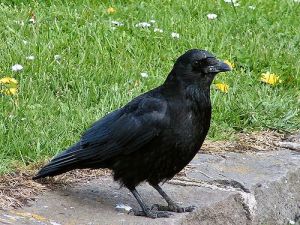 In the UK, Corvids refers to Carrion Crows, Hooded Crows, Magpies, Jays, Jackdaws, Rooks, Ravens and Choughs. The species most likely to come into conflict with households are Carrion Crows and Magpies who are regular, confident garden visitors. They tend to be bird marmite – many love and appreciate them for their intelligence and willingness to develop relationships with humans who are kind to them. But some find them noisy, messy or are upset by their predation on other species.

Corvids sometimes attract criticism for “stealing” eggs and chicks from the nests of other birds. Of course this is very distressing to witness but it is simply part of nature in the same way as when a osprey takes a fish, a kestrel takes a mouse or a hedgehog eats a slug! Predation is a natural part of regulating species numbers. Yes, they will sometimes take birds who are threatened such as sparrows and song birds but these birds aren’t threatened because of natural predation. They are threatened because of habitat destruction and the introduction of unnatural predators such as domestic cats.

Larger birds may sometimes “hog” food left out for other garden visitors and, since what goes in must come out, can be a little messy.

Corvids can also be quite vocal and some may object to their noise, especially during the baby season. At this time of year, parents birds can also defend their nests and babies with considerable passion, including ‘bombing’ people and pets.

Many kinds of vertebrate pest problems can be largely alleviated by modifying the conditions of the habitat.

Well there’s the obvious issues such as it’s cruel, unnecessary and unfair to take an animal’s life simply because it is causing you inconvenience. Aside from that it is difficult and dangerous. But above all it will not solve your problem!

If you kill the crow who is stealing your bird food, or the magpie who is dive-bombing your cat, but still leave your bird food easily accessible and your garden welcoming, others will soon move in to the now-vacant territory and repeat the same behaviours.

The most effective method of resolving a wildlife conflict is to remove what is attracting the animal. These basic tips will help to make your garden less interesting

If that proves ineffective, the next step is to actively deter the animals. To do this, you need to offend as many of their senses as possible. Birds rely more on sight and hearing than taste and smell so that’s where to focus your approach.