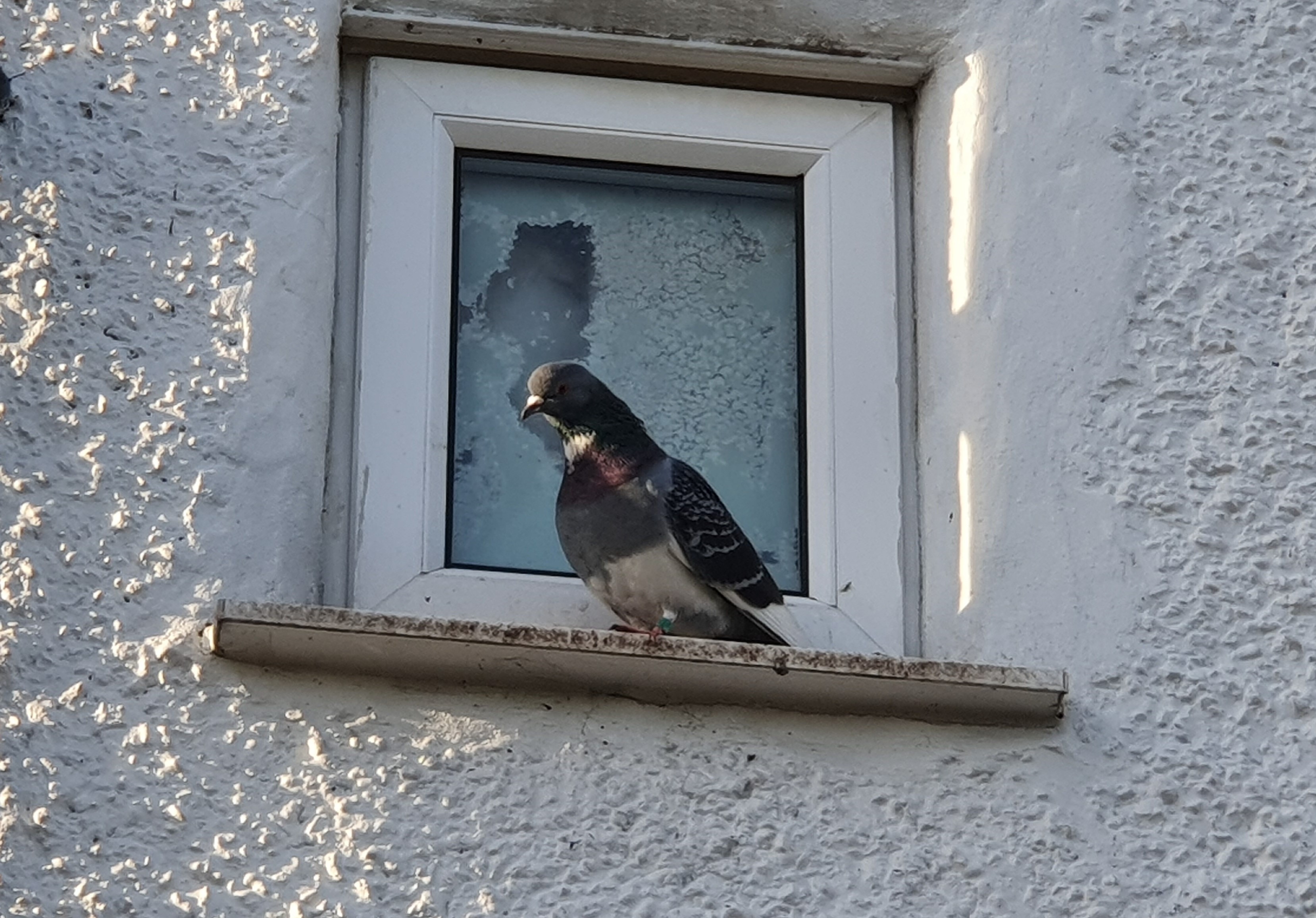 There are five species of pigeon and dove normally present in the UK. Each has a different conservation and legal position.

On this page, we'll cover the common complaints an average householder might have about the presence of pigeons. We won't be covering larger scale/commercial issues. PiCAS are a good source of information for this type of conflict.

Clearly, no bird understands the concept of ownership. If food is put out, they will happily partake. Contrary to popular belief, small birds like sparrows and tits are not generally 'scared off' by the presence of larger birds such as pigeons. Consequently it can be difficult to 'pick and choose' which birds you do and don't want to feed.

Rock doves/feral pigeons are naturally cliff nesting birds so balconies are perfect nest spots for them, closely resembling a ledge on a cliff. You should be aware that nesting feral pigeons are protected under law, just as other birds are. This means that it is illegal to disturb or harm their nests or eggs. The only exception is where there is a demonstrable risk to public health or safety and non-lethal methods are not practicable. This is extremely unlikely to apply in this situation - it's not enough to simply cite the common myth that pigeons are 'dirty' or 'spread disease'. The presence of a nest on a balcony is highly unlikely to pose a health and safety risk.

Well there’s the obvious issues such as it’s cruel, unnecessary and unfair to take an animal’s life simply because it is causing you inconvenience. Aside from that it is difficult and dangerous and will be illegal in all but issues of health and safety. But above all it will not solve your problem!

If you kill the wood pigeon who is stealing your bird food, or the feral who is nesting on your balcony, but still leave your bird food easily accessible and your balcony welcoming, others will soon move in to the now-vacant territory and repeat the same behaviours.

The most effective method of resolving a wildlife conflict is to remove what is attracting the animal. These basic tips will help to make your garden less interesting

If that proves ineffective, the next step is to actively deter the animals. To do this, you need to offend as many of their senses as possible. Birds rely more on sight and hearing than taste and smell so that’s where to focus your approach. However, these methods are likely to affect all birds, not just the ones you consider undesirable.

In the case of nesting pigeons, your only legal option is to wait until the babies have fledged and the nest is no longer in use and then take measures to clear the balcony and prevent the nesting birds returning. Often, just ensuring the balcony is clean and tidy without areas for the birds to hide under will be enough to deter them from nesting there again. It also helps to go out there regularly so the birds see human activity in the area. If the issue persists, the most used solution is to block access to the balcony with netting. However, this must be professionally installed and regularly maintained otherwise it becomes loose and birds can become trapped in it. If this occurs you would be liable for prosecution under the Animal Welfare Act if any suffering is caused.