The ethics of pigeon racing Print

If you have found a lost racing pigeon please read our article here first.

Working in wildlife rescue has brought scores of lost, emaciated, dehydrated and injured racing pigeons to our care and led us to question the ethics of this “sport”. Pigeon fanciers have a public image as a gentle, cuddly granddad with a deep love for his birds. But wildlife rescuers often see a darker side. The majority of calls to fanciers about their lost birds result either with being told to just leave it to find its way home, or an admission that the bird is no longer useful and they would just “neck it” if returned. Many of the birds handed in to rescues are surprisingly tame with little of the survival instincts of their wild cousins leading us to wonder if releasing them for races was really much better than releasing an unwanted pet budgie into the wild. One might assume that losses are fairly isolated incidents but research has consistently shown that the average loft will lose as much as 60% of its occupants each year! What’s worse is that rather than take responsibility for these losses, many pigeon racers blame indigenous predatory birds or even wild pigeons (for tempting their birds away!) and call for culls of raptors, corvids and feral pigeons. So pigeon racing affects not just the racing pigeons themselves, but many other birds too. 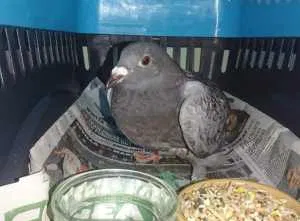 Daisy, a young racing pigeon who was attacked by a predator while on a training flight. She was so traumatised she wouldn't eat and hardly moved for several days.

The life of a racing pigeon

It’s likely that racing pigeons are quite well cared for whilst they are racing or breeding. A bird which is not healthy and well fed won’t perform well in a race. Our concern is, what happens to the birds once they are too old to race or breed or if they fail? It only takes a brief search of the internet to reveal many reports of people contacting pigeon owners only to be told that the bird will be culled as it’s no longer of use. Look at the pigeon racing forums themselves and you’ll find many references to birds being “binned” because of a failure to perform. It’s clear from reading these forums that culling unproductive birds is extremely common place and fanciers are encouraged not to talk about it in public. Logically, without culling, either directly or indirectly through birds lost in races, lofts would soon be filled with older, slower birds since pigeons can live into their teens. It’s hard to see how a fancier can remain competitive without disposing of older or less productive birds in some way. 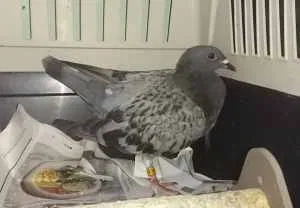 Ariana was attacked and played with by two cats, suffering multiple puncture wounds and a shoulder injury

Following pressure from pigeon racers to take action on alleged predation by raptors on racing pigeons, Scottish National Heritage conducted a review of research into this topic. You can read the full report here

They found that, on average in Scotland, 56% of the loft population is lost each year either at the loft, in training or during races. They looked at the results of a survey of members of the Scottish Homing Union (SHU) and found that, by their own admission, members lost 33,043 birds during training flights and 34,685 during races. The figures for losses amounted to an average of 40 birds per loft per year. According to the Royal Pigeon Racing Association (RPRA) there are 60,000 pigeon fanciers in the UK. If we apply the figures from the Scottish studies, this would suggest that UK fanciers lose around 2.4 million birds per year! The sheer volume of suffering caused by this sport is hard to even comprehend!

The outlook for these missing birds is grim. One of the studies reviewed by SNH indicated that a major contributory factor to losses during races was weakness due to the conditions imposed on pigeons during transport to liberation points. Lack of drinking water, or the opportunity to utilise it, and overcrowding in poorly ventilated transporters, caused birds to dehydrate and overheat. This then meant they were weakened and more likely to die on the race route.

One study, which looked at the condition of lost racing pigeons handed into wildlife hospitals, found that the majority of these birds were very underweight, averaging 315g compared to an average weight amongst healthy birds of 425g. So that’s a potential loss of more than a quarter of their body weight! 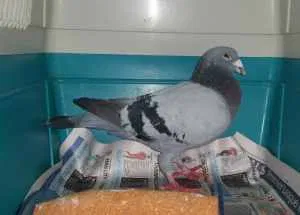 Imagine the amount of physical trauma which would cause these birds to lose a quarter of their body weight. That’s like the average human losing three stone, something which would usually take months. Yet these stray birds lose that amount in a matter of days due to the extreme physical exertion and subsequent starvation.

Some lucky lost birds might get picked up by someone who contacts their owner using the contact details on the bird’s ring or wing stamp. Most of the pigeon fancier unions have a code of practice requiring their members to take responsibility for their lost birds. But this only really requires them to arrange for it to be collected from the finder and/or culled. Indeed the RPRA handbook states “If a finder is employed as, or carries out the business of, a pest controller, the owner shall have the right to request the finder to dispose of the bird or birds in the same manner as he deals with feral pigeons which come into his possession”. Our experience is that birds who have not found their own way home are rarely valued by their owners. 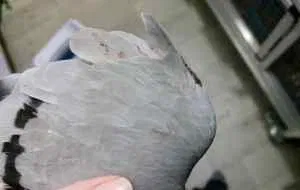 The wing of this bird, ‘Polly’, was partially missing on admission. It’s believed she was shot at by a landowner who objected to her hanging around.

The studies reviewed by SNH suggested sparrowhawks were implicated in the loss of about 0.7% of the Scottish racing pigeon population. Estimating the numbers taken by sparrowhawks was made simpler by the fact that sparrowhawks tend to take birds from around the lofts. As peregrine falcons tend to take birds during races, it was harder to reach an accurate estimate of their impact. The studies did find that around 60-70% of the racing pigeons predated by peregrines were birds that were already feral, or had strayed significantly from their flight routes. Around 36% were “race-feral” birds – those which had been absent for over a year – and, they concluded, do not represent a direct loss to the fancier.

The Raptor Working Group found that only around 7.5% of racing pigeon losses could be attributed to raptors and that straying and collisions accounted for substantially more losses each year.

Some fanciers are willing to break the law and take direction action against birds of prey as the links below show. 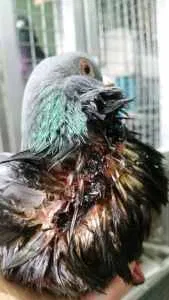 Of course, the response will be that these are an isolated few. But a desire to see birds of prey culled is certainly not isolated in the pigeon fancy. Whether it’s their own birds or wild birds, there are plenty of pigeon fanciers who think it’s fine for birds to die for their hobby.

The fancier’s view below, sent to us by email, spelling and grammar is as received! The reference to police is because this charming chap threatened us with violence because he disagreed with our views on his sport –

Your just like the politicians that run our country, any excuse to keep your preditures, I will not be silenced by yourself and the threat of Police, so get stuffed, your a do gooder and thats whats spoiling our countryside, everything needs to be in perfect order to make things work. Im telling you and your so called do gooders there too many RAPTURES killing the song birds, not just racing pigeons, and one day they will be a reconing. I like wild life, but it need managing to make things balance, but youi people think you know everything, you dont. Still disgusted with your views.

We do not deny that birds of prey will take and eat racing pigeons, of course they will. Rock Doves, the wild descendants of domestic pigeons, make up a fair part of the natural diet of some of our raptor species. But scientific study has shown that raptor predation accounts for far fewer losses than other factors. We believe that calling for native wildlife to be culled in order to protect a hobby practised by a very small minority of people is utterly unjustified and unreasonable. To be blunt, if pigeon fanciers wish to see lower numbers of birds of prey, they should consider not sending them so many easy meals! 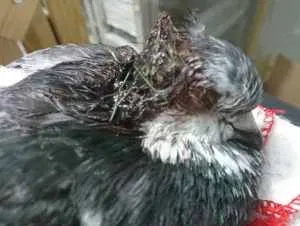 ‘Norman’, attacked possibly by crows and sustaining severe head injuries. Sadly, he had to be euthanised to prevent further suffering.

Just to clarify – when we talk about the persecution of raptors by pigeon fanciers, we are sometimes accused of being falconers or RSPB members (the implication being, I assume, that we are concerned only with the conservation of “exciting” species and predators). Helpwildlife.co.uk is devoted to the care of ALL wildlife and values the life of all wild birds and animals from mice to eagles, regardless of their numbers, appearance, or any other factor. Indeed, if the author had to choose they’d say pigeons were their favourite species of bird. Our criticism of pigeon racing is not about politics or any other species, it is purely down to a concern for the welfare of the pigeons themselves.

Undoubtedly there are fanciers who care for their birds or believe that they do. But however well cared for, however “loved”, our view is that releasing a tame, dependent bird into the wild to face predators, shooters, power lines, cars, poor weather and just plain exhaustion in the full knowledge that the odds are against the bird returning home safely, is cruel!